Port Coquitlam Honour roll
Robert Carruthers    1st Canadian Division Cyclist ( Canadian Corps Cyclists Battalion ) 2141  Robert signed his attestation papers on the 14th of October 1914 while onboard the S.S. Ruthenia (1)   he was born on the 18th of March 1883 at Penrith, Cumberland, England. He was living in Port Coquitlam, and working as an insurance broker. Robert has the distinction of being the only person on the Honour rolls in the Tri-Cities to have served with the Cyclist Corps, a great resource about them can be found HERE

SERVICE RECORD:   Medical discharge, due to deafness 30 August 1918, he served for just a few weeks over three years, primarily in France. His wife stayed in Port Coquitlam, while Robert was away and then in 1916 she moved to 2547-45th Avenue, Kerrisdale, Vancouver.  Robert apparently had some sort of nasal abnormality, that was thought to be a partial cause of his deafness, which was intensified by him serving his country so he was discharged, before he could become totally deaf. 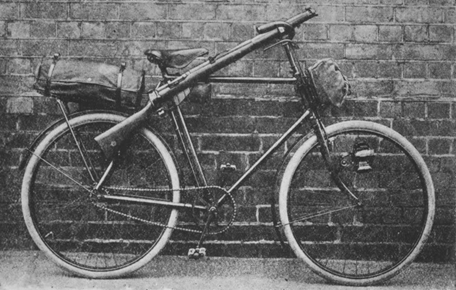 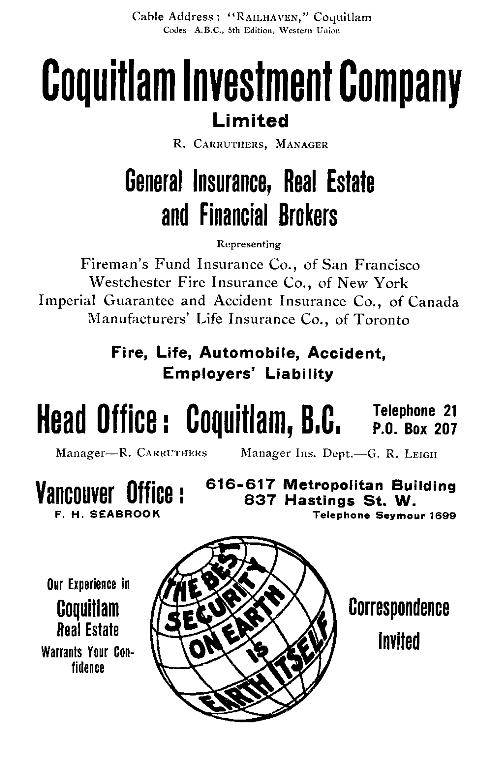 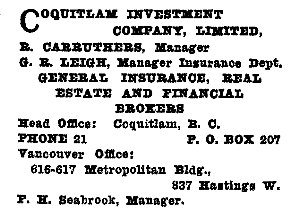 Robert Carruthers, died on the 9th of May 1967 at Essondale hospital, Coquitlam, B.C.  His parents: Thomas Marlow & Elizabeth Stalker
Robert Carruthers is buried in the Mountain View cemetery, Vancouver, B.C.

Some information about his fellow associates in the  Coquitlam Investment Company Limited:
George Roy Leigh / G. Roy Leigh   26 January 1888 Peterborough, England. – 6 June1961 Royal Columbian Hospital, New Westminster, B.C., he was 73.  parents: George Thomas Leigh, and Cathleen Gibson.  Retired in 1958, city clerk for 23 years. In 1913 Roy married Alice Lucy Seabrook ( 1888 — 1969 )
In the 1911 Census: we find living at Sunshine Falls, North Vancouver; F.H. Seabrook ( 1874 — ) and his wife Fedelia ( 1884 — )  they had immigrated in 1904. Their guest was George Roy Leigh, school teacher, who had immigrated the year before in 1910.
“For More Than 40 Years, G.R. Leigh has Guided Destiny of Port Coquitlam”
Those words were printed in the Vancouver Sun on April 17, 1954, in honour of the retirement of G. Roy Leigh. Arriving from Northamptonshire, England in 1912, Leigh was a charter member of the Port Coquitlam staff when the city was incorporated in 1913. Soon after, the boundless optimism which had swept through the city had faded amidst hard times. By 1921, the war, Spanish Flu, fire and flood had taken their toll on the city and its finances. Some 75 percent of all properties reverted back to the city through tax sales. The remaining 25 percent carried the burden of debt payment and maintenance.
While other cities were defaulting on their loans and going into receivership, Port Coquitlam remained steadfast under Leigh’s no-nonsense, honest and gentlemanly approach. He lowered salaries, reduced overhead and costs and re-negotiated debts with bondholders.
In addition to his roles as assessor and city clerk (a role he assumed in 1938 from John Smith) he had served as the first president of the Municipal Officers Association of B.C., Secretary of the School Board, Justice of the Peace, as well as being a judge and police magistrate. It is likely not a stretch to say that Port Coquitlam as it exists today would probably not have been the same if it were not for Leigh, who passed away in 1961. The original Leigh School in Coquitlam as well as Leigh Square  both carry his name.

Francis Henry Seabrook  born in 1874 at Peterborough, England. Parents:  William Seabrook and Jane Hooker.   In 1909 he married Marie Emma Fedelia Seguin (1884—). Her preferred first name was: Fedelia
George Roy Leigh was married to Francis H. Seabrook’s sister Alice Lucy
They appear to have became naturalized American citizens in 1936; they  appear to have been living in the Los Angles area for a few years. 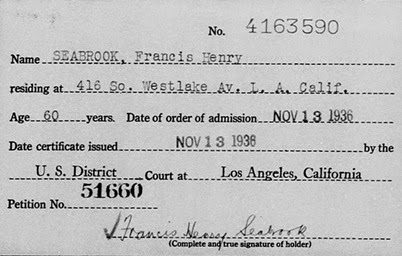 No idea if there was a familial relationship with
Frank Herbert Seabrook ( 1868 — 1937  )
who was into much the same business. 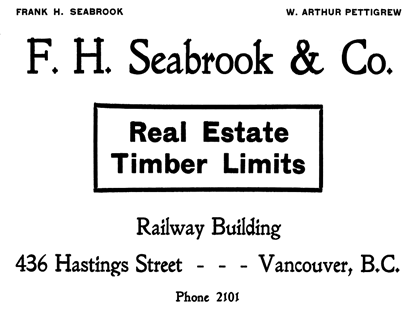 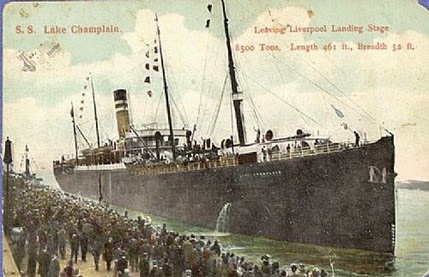 Posted by niftyniall at 1:17 AM