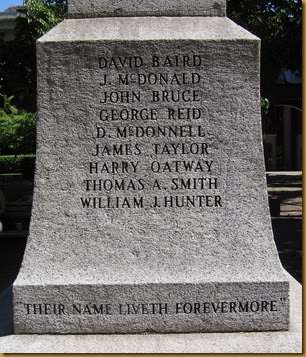 Port Coquitlam cenotaph, plinth, west side
John Bruce, "Jock Bruce"   Private  790597
Born at Renton, Dunbartonshire, Scotland on the 11th of July 1889, his attestion paper states that he was a ships riveter.
He played for the local Black & Gold football team. John enlisted on the 11th of February 1916 with the 131st battalion, and was Killed In Action, KIA on the 22nd of August 1917,in France at the age of 28.
Virtual memorial for John Bruce
His father was David Bruce, of Renton, Dunbartonshire. John also left a sister behind Jean Bruce, who possibly became Mrs. Jean McIntyre.
At his death he was in the Canadian infantry ( Western Ontario Regiment ), 47th Battalion.  John is memorialized at the Vimy Ridge memorial 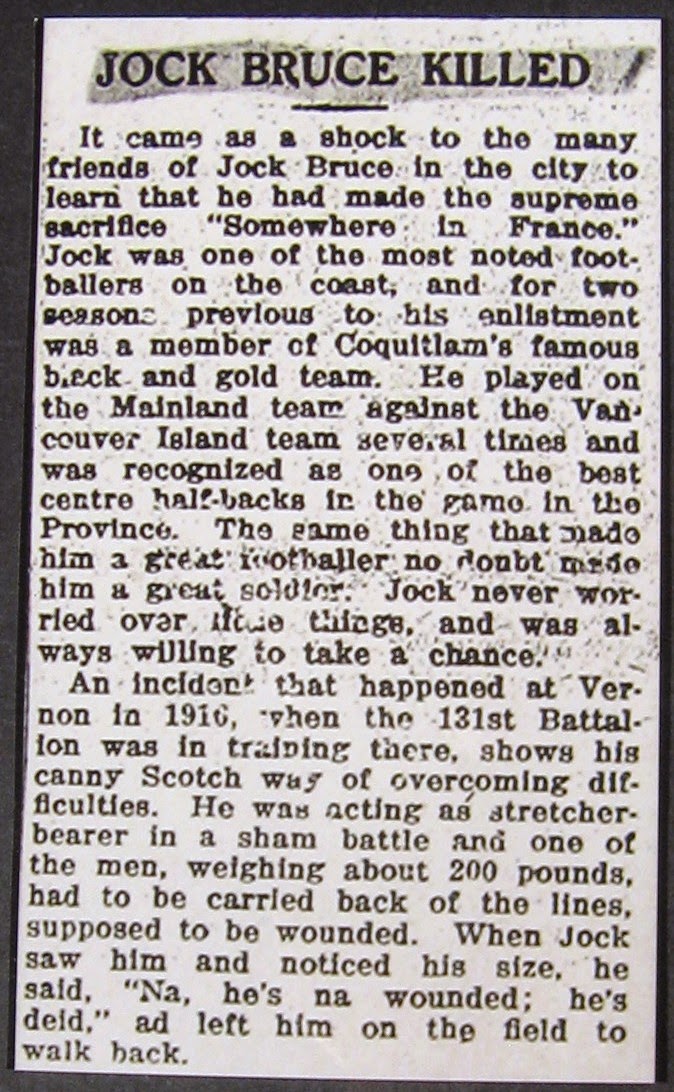 Article from a display at the Port Coquitlam Museum, probably from the Coquitlam Star, newspaper. The article is transcribed in full, below.

It came as a shock to the many friends of Jock Bruce in the city to learn that he had made the supreme sacifice "Somewhere in France." Jock was one of the most noted footballers on the coast, and for two seasons previous to his enlistment was a member of Coquitlam's famous black & gold team. He played on the Mainland team against the Vancouver Island team several times and was recoginized as one of the best centre half-backs in the game in the Province. The same thing that made hime a great footballer no doubt made him a great soldier. Jock never worried over those things, and was always willing to take a chance.
An incident that happened at Vernon in 1916, when the 131st Battalion was in training there, shows his canny Scotch way of overcoming difficulties. He was acting as stretcher-bearer in a sham battle and one of the men, weighing about 200 pounds, had to be carried back of the lines supposed to be wounded. When Jock saw him and noticed his size, he said, "Na, he's na wounded; he's deid," and left him on the field to walk back.

NOTE: the area where John was born is long noted for its capable football players NOTE: Sadly very little is known about him, he is not memorialized at his birthplace.
Posted by niftyniall at 1:27 AM