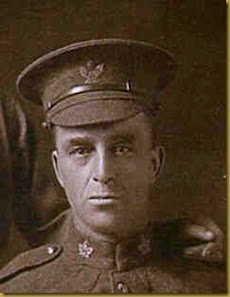 Notes for Ralph Wellington Atkinson ( found online, transcribed here.. )
Ralph served in the Army in WW1. It looks, from the cap badge in his picture as if he served with the 29th Battalion. They were also known as the Westies. His attestation papers and a copy of the cap badge are in the photo scrap book.He had served with the 104th Regt militia but joined up in New Westminster on the 8 Jan 1916. His service number was 790491
We ordered his service record which is summarized as follows:
In any event, he was attested in New Westminster BC on the 8th of February 1916. He shows his date of birth as 23 Oct 1875 and that he was born at Bethesda Ontario. He was living in Port Coquitlam at the time and Maggie’s address as next of kin was Port Coquitlam. He shows his occupation as a carpenter and that he had been a member of the 104th Regiment as a member of the militia.
He was 40 years old when he signed up. That is really old for a soldier to sign up. He was 5’ 83/4” tall. He had no abnormalities except a scar on his left leg. He showed his religion as Methodist.
He joined the 131st Battalion on the 8 Feb 1916. His regimental number was 790491. He completed a form called Particulars of Family of an officer or man enlisted in the CEF. There are some details on it, particularly that Maggie would have a Richmond Hill address while he was overseas. He lists three children at that time, Ethel May 15, Lambert 10 and Dorothy 8.
He arrived in England on the SS Coronia from Halifax on the 11 Nov 1916. He is trained at Shorncliffe, and then posted overseas to the 29th Battalion in France on the 14 Feb 1917. It is perhaps worthwhile noting that at this time new battalions coming from Canada, were broken up and the men used to re-supply the existing battalions. The 29th Battalion was also known as the Vancouver Battalion as most of its original men were from that area. It was a Battalion that was in the 2nd Contingent that went over and Uncle Ralph appears to have joined it in France. The cap badge in the photo of he, Maggie and the children is of the 131st Battalion.
On the 10th of April 1917, he enters hospital for an accidental cut on his right thigh. He is discharged the 11th of May 1917.
On the 13 June 1917, he is hospitalized with appendicitis and is transported to Bologne France for an appendectomy. He is discharged back to the 29th Battalion on the 18 July 1917.
12th Jan 1918 he is granted 14 days leave.
The 8th of Feb 1918 he received a Good Conduct Badge (This is an inverted fabric chevron worn on the lower sleeve that indicates a good soldier) Returns to the 29th the 3rd of May 1918.
The 11th of August 1918, during the Pursuit to Mons, he receives a gun shot wound to his right forearm. He is treated and evacuated to England. He is treated at the Princess Elizabeth Hospital in Seaforth England. He is discharged to the 3rd CCD ? on Light Duty in Shorncliffe in Nov 1918. By that time the war is over and he is sent home on the 7 Dec 1918. He arrives in Montreal on the SS Olympic and is discharged at Toronto on the 6 Jan 1919.
Famous battles he was in were Passchendaele, Amiens and Arras.
He is not mentioned in the 29th Battalion’s War Diary.
After the war, there seems to be pay records that he received, at least for a short time, some pension.
There are also records indicating that a portion of his pay was sent to Maggie in Canada by the War Office.
He came back to Ontario and worked as a carpenter. He became a contractor and builder in Richmond Hill. Louise told us that he had a little terrier dog and that he used to put a mint on his nose and tell him not to eat it until he told him to. The dog would faithfully let the candy sit there until Ralph said OK.
He died 2 Jan 1954 sitting in Cliff Gordon's car on the main street of Stouffville. Apparently suffered a heart attack.

--- 30 ---
If the following newspaper article is correct the story of his death above is incorrect.

Stouffville Tribune, Stouffville, Ontario 7 January 1954, page one
Posted by niftyniall at 11:12 AM