1945 Cariboo Observer:  "Sergt." Ernie Buck in hospital. His health was deteriorating, mentioned frequently in the local newspapers from now on.
In 1946  special nurse-orderly, formerly with the Canadian Army Medical Corps Ernie Buck, accompanied Benjamin Grigin (1) by plane to Vancouver.
(1) Benjamin Alfred Griffin (1870 - 1946 ) Benjamin died five days later at Essondale after Ernie Buck accompanied Ben to the Coast. Ben suffered from senile dementia, and is buried in the Woodlands Cemetery
-------------------
1949 Ernie in Vancouver for treatment "Old Sarge" the branches oldest legionnaire, and general favourite.

1949 September   "Adjourner" missed
Considerable difficulty was encountered by the meeting in getting a motion of adjournment, due to the absence of the official "adjourner," E.L. (The Sarge) Buck. granddaddy of the Cariboo branch who at present is at the Coast getting medical attention. 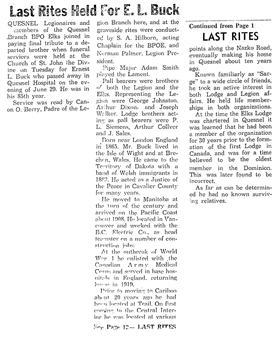 Cariboo Observer  6 July 1950  page one.
Last rites held for E.L. Buck
QUESNEL Legionnaires and members of the Quesnel Branch BPO Elks joined in paying final tribute to a departed brother when funeral services were held at the Church of St. John the Divine on Tuesday for Ernest L. Buck who passed away in Quesnel Hospital on the evening of June 29. He was in his 85th year.

Service was read by Canon O. Berry, Padre of the Legion Branch here, and at the graveside rites were conducted by S.A. Hilborn, acting Chaplain for the BPOE, and Norman Palmer, Legion President.
Pipe Major Adam Smith played the Lament.

Born near London England in 1865. Mr. Buck lived in the Isle of Wight and at Brechen, Wales. He came to the Territory of Dakota with a band of Welsh immigrants in 1883. He acted as a Justice of the Peace in Cavalier County for many years.

He moved to Manitoba at the turn of the century and arrived on the Pacific Coast about 1908. He located in Vancouver and worked with the B. C. Electric Co., as head teamster on a number of construction jobs.

At the outbreak of World War I he enlisted with the Canadian Army Medical Corps and served in base hospitals in England, returning home in 1919.

Prior to moving to Cariboo about 20 years ago he had been located at Trail. On first coming to the Central Interior he was located at various points along the Nazko Road, eventually making his home in Quesnel about ten years ago.

Known familiarly as "Sarge" to a wide circle of friends, he took an active interest in both Lodge and the Quesnel Legion branch #94  affairs.
He held life memberships in both organizations.

At the time the Elks Lodge #298  was chartered in Quesnel it was learned that he had been a member of the organization for 30 years prior to the formation of the first Lodge in Canada, and was for a time believed to be the oldest member in the Dominion.
This was later found to be incorrect.
As far as can be determined he had no known surviving relatives.

Ernest Lewer Buck died on the 29th of June 1950 at the Quesnel General Hospital, and he is buried in the Quesnel Cemetery.

NOTE: his death certificate states that he was born on the 14th of October 1865, (Brentford, Middlesex) which appears to be a correct date; as usual never matches the attestation paper date of 17th of October 1872.
Posted by niftyniall at 6:15 PM