Leonard Bundy, Corporal, 104th Westminster Fusiliers; BCR 7th Battalion.
Signed his attestation papers on the 23rd of September 1914 at Valcartier, Quebec; he was made a corporal the same day.     17083
Hospital attendant at Essondale Hospital
Born on the 12th of January 1884, at Eaton Socon, Bedfordshire, England. 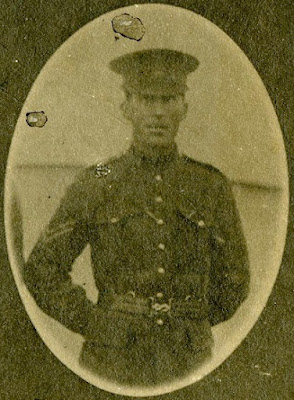 Recently found photograph of Leonard Bundy, which was part of a large collage of photographs of Essondale Hospital staff.  ca. 1914-1915?

Leonard Bundy immigrated from England in 1907, the 1911 census, finds him living as a lodger in Toronto East, at 370 Berkley Street; and working as a Toronto policeman. The 1912 directories, show that he continued to live at the same place, and work as a policeman, until 1912; after 1913 no reference to him.

Corporal Leonard Bundy was wounded and missing his unit was in the area of Keersalaere to St. Julien, Belgium at the time.

He was presumed dead on the 24th of April 1915. His remains have never been found, so he is commemorated in the Menin Gate (Ypres) Memorial.

He is also commemorated in a war memorial at Eaton Socon

Page 613, of the Circumstances of Death Registers.

A family member has shared some of the Service file on this Page
NOTE: He is not commemorated on the Port Coquitlam, or Coquitlam cenotaphs, but he was noted in the Hospital Annual Reports 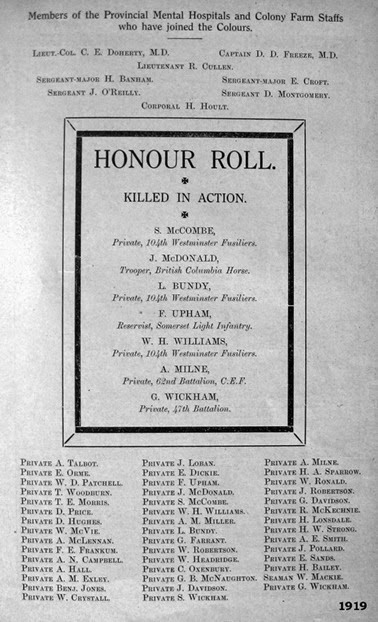 Posted by niftyniall at 9:06 PM