Richard died on the 1st of January 1967 at the Jesmond Rest Home, 668 Dallas Road, Victoria, B.C.
He  lived in the province for 55 years, with the last 21 years living in the Victoria area. He never married, and his death certificate states his birthday as the 14th of May 1879, which differs, as usual from his attestation paper date of 1882.  He had retired in 1948, after working as an accountant for thirty years.  He is buried in the Royal Oak burial park, in Saanich, along with some more family members.  A niece: Norah Dorothea Cullen, Norah Dorothea Wagget,  gave the information used on his death certificate 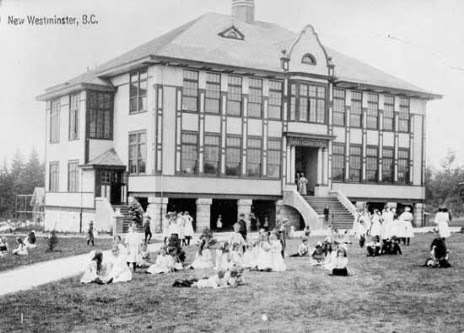 Lord Kelvin School with students on lawn. - [ca. 1912]
( photograph from the New Westminster Archives IHP7989   and 31 more images )
This building was fairly new in this image, it replaced another one on the site, both have been torn down, but a Lord Kelvin Elementary school still exists at the same address:  1010 Hamilton Street, New Westminster, B.C.

NOTE:  It is interesting how confusing these records can be sometimes, an example is below:  A death record for a Richard Cullen who was a sergeant in the 32nd Battalion, Royal Fusiliers. and he died on the 17th of June 1917 in Belgium. the service number given 53021  is for a Stanley B. Rourke
But there are two,  Richard Cullen’s listed in the C.E.F. files, and both made it through the war and lived normal lives. But we have this mysterious other Richard Cullen.
Threw me off for a while, thinking that the dead Richard Cullen was the person that I was interested in, until I was able to go through the actual service files, which of course continue to have notes past the date of death of the mysterious Richard Cullen.
Posted by niftyniall at 11:34 PM