Port Coquitlam
( Sam is not on the official Honour Roll, but he should be )

Samuel Brown, Sam Brown  131st Battalion  791031  Signed his attestation papers on the 12th of April 1916, at Vancouver, B.C.  Home was Port Coquitlam, where he was working as a logger.  Born on the 24th of March 1876 ( NOT the correct year ) near Belfast, Ireland.
Brother: George Brown, of Castle Green, Comber, Ireland.
Service record:  France 16½ months with the 4th Labour Battalion.

He was discharged from service on the 18th of November 1918 at Victoria, B.C., after 31 months of service.  It appears that his true age was discovered, and he was discharged as unfit because there was a law that retired anyone who was overage. 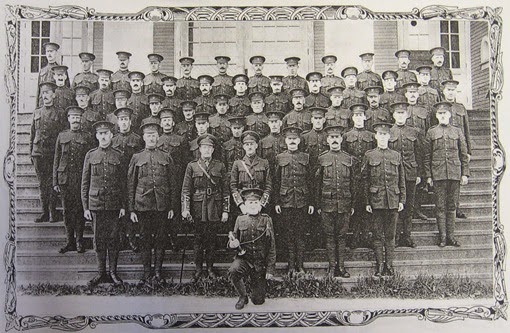 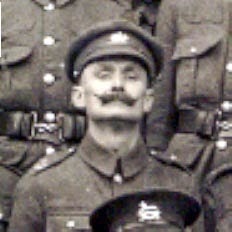 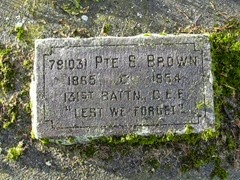 Grave marker in Veterans section of the Fraser Cemetery, New Westminster
( photo from the Find-a-grave website )
The description about Samuel Brown at the Find-a-grave website is correct for the most part, but one main error is the fact that Samuel actually worked as a gardener for the Pacific Mills at Ocean Falls, B.C., from at least 1925 to 1946, in 1947 he was admitted to Essondale, where he spent the last seven years of his life.
Samuel Brown died on the 5th of August 1954 at Essondale hospital, Coquitlam, B.C., at the age of 88; he had spent 44 years of his life in B.C., and 22 years elsewhere in Canada.   See also the Bowell & Sons obituary card for Sam Brown
Note: on the Find-a-grave site, the researcher states that Sam immigrated in 1887 and worked in the northern wilds of B.C. as a logger, and that he was born in 1865 (which is what the death certificate states, which does not align correctly with the Irish birth certificates in the LDS database.

Also the family appears to have had ties to Comber, in County Down, Ireland, they are mentioned a few times in some of the Comber History website texts.
Posted by niftyniall at 12:17 PM